And the story of Poppy's Carribean Adventure continues.... 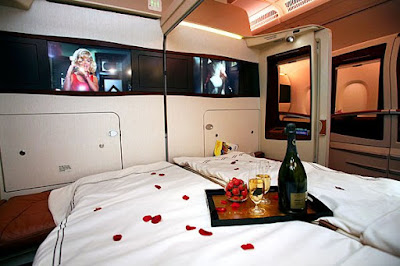 Poppy had just reached the part of her fantasy where Gage swept her up on the desk, legs spread on either side of his hips, his hands riding up her inner thighs; and her breathing had begun to quicken, when Gage shut down his laptop and stowed it away. He reclined his seat all the way back until he lay parallel to her.
She held her breath, listening as he stretched out beside her. He fussed with the blanket, puffed up his pillow, and switched off his overhead light. She listened for his breathing to turn deep and even.
With just the barest stretch of the imagination (and the magical disappearance of the dividing screen between them) they could be spooning.
She squeezed her eyes shut and concentrated on her breathing. Deeply in. Deeply out. God, even her breathing was giving her erotic fantasies. Get a grip, Poppy Monroe. You’ve done this before. Three times before, and you survived all those flights without molesting the man.
But not for nine hours, her mind argued back. The furthest they’d flown together before was three hours to Rome. And that flight had been too short for sleep. Still, at least when this was over she could honestly say she’d slept with her boss. She couldn’t help smiling at the thought.
Behind her, Gage shifted position and her entire body went on high alert. He wasn’t able to sleep either. After another ten minutes he fiddled with the controls and dropped the divider between their seats.
She hadn’t thought her body could get any more hyper than it already was, but it did. He’s only trying to get comfortable, she reasoned.
But he wasn’t trying to get comfortable when his arm snaked over to her side to pull her blanket up and over her.
Breathe, damn it. He thinks you're cold. That's all.
If only. Her nipples couldn't be any harder, and it wasn't from cold.
His hand settled to rest gently on her hip.
Oh. My. God.
He’s touching me. Really honest to God touching me.
Her breath faltered.
“Are you awake?” Gage whispered.
Hell yes. How could she not be?
She murmured, as if half asleep. He sighed and settled down again. But he didn’t remove his hand.
Definitely not cold.

Are Poppy's wildest fantasies about to come true? Read on to find out...

Poppy screwed her eyes closed, but it didn’t help. Her body had developed a super sensitive Gage-radar. She could tell when he was close, knew when he was about to enter the outer office where she worked, and her ears seemed to have developed an uncanny ability to hear his voice even in a crowd of people. Like that time at the company conference in Barcelona when he’d mentioned her name to one of the partners and she’d looked up, curious, and met his eyes. She’d blushed. He’d raised an eyebrow. She’d had to turn away for fear of revealing this childish crush she’d developed on him.
The cabin fell silent. The flight wasn’t full, and most of the other passengers were either absorbed in their TV screens, or had already drifted off to sleep. At the back of the cabin, barely audible above the roar of the jet plane engine, Poppy could just make out the muted conversation of the flight attendants. Earlier, they’d practically fallen over themselves offering Gage champagne and snacks and pillows. He’d only narrowly averted a full out wrestling match in the aisle by politely declining all offers and saying he needed to work.
Poppy could have told them that Gage never mixed business and pleasure. At work, he was 100% focussed on work. Outside of work… well, she’d never seen him outside of work, but according to the local tabloids, he was 100% focussed on play.
But since this was a business trip, she doubted he’d notice even if the flight attendants stripped naked and danced down the aisle. Okay, maybe he’d notice, but he wouldn’t act on it.
Poppy sighed and re-settled herself in her seat. The high walls of the two-seat pod enclosed them, isolating them from the other passengers. Under other circumstances, she would have loved the isolation; the lack of some stranger coughing over her all night; the intimacy. If only she had some other man here with her. Like Andrew from Marketing. Andrew would have made the most of the isolation. Even without three glasses of champagne in him, Andrew would have dropped that flimsy divide between their seats and had his hands on her the moment the cabin lights dimmed.
But not Gage. Three glasses of champagne later, and he was still working. The man had to be made of marble.
When she’d first started working for Gage she’d fantasised about an away trip just like this one. She’d also fantasised that one day he’d look up from his desk as she entered his office, would suddenly look at her as a woman and not as his personal assistant, and sweep her up off her feet and onto the desk.
As the weeks had turned into months without any desk sweeping, she’d stopped fantasising.
Now, stretched out beside him, breathing in his sexy scent and listening to his soft breathing, she let the fantasies slowly replay.

Want more of Poppy's fantasy? Then read the next instalment here.

In the spirit of my Resolutions for 2015, here's the first installment of my first story: Poppy's Carribean Adventure. (Okay, crappy title - let me know if you can come up with something better!)

Poppy wasn’t afraid of flying, she simply didn’t like it. She hated the tedium of hours stuck on a plane, in an uncomfortably small space, usually surrounded by people who either coughed, snored or spoke too much.
Flying with her boss was even worse. It had to be pretty close to the top of her list of least favourite things to do.
Admittedly, travelling with Gage meant a first class seat. But more legroom and a deeper recline could not make up for the excruciating awkwardness of having to spend hours within touching distance of a man who’d been able to melt her panties with a look since the first time he’d interviewed her. Especially when said panty-melting was clearly a one way street. As she’d realised when he’d called her back for two more rounds of interviews.
Nothing dented a girl’s confidence like knowing the new boss wasn’t convinced he wanted her for the job. Especially since her last two bosses had hired her two minutes after she’d walked into the room. They’d both drooled all over her at first meeting too.
Gage didn’t drool. Ever.
Women, on the other hand, were very apt to drool over him. He didn’t always notice, which was one of the things Poppy liked most about him.
Sometime during her second interview, when he hadn’t seemed to notice the HR girl’s very obvious attempts at flirting, Poppy had vowed she would never drool over Gage. A girl had to have some dignity, after all.
She managed to be all business around him for eight hours of every day, but that was much easier with a wall separating their desks. Not so easy when his fore-arm kept brushing hers on the armrest between their seats.
Nine hours. She could do this.
Somewhere over the Atlantic, once the dinner and drinks rounds were done, the cabin lights dimmed. Gage turned on his overhead light, settled his laptop on the pull-out desk, and set to work.
Poppy didn’t have any work to do. She flicked through the onboard movie selection, but nothing caught her eye. She opened her Kindle, but most of the books on there were on the spicier side of romance, and she wasn’t sure she wanted to be caught reading a sex scene if Gage glanced her way.
So instead she plumped up the airline pillow, reclined her seat, turned her back on her boss, and pretended to sleep.
Real sleep wasn’t possible. She was too aware of Gage, of his long legs stretched out beneath the desk, of his powerful thighs a few mere feet away from hers, of his sure hands stroking the keyboard. Of his ridiculously sexy smell. Gage always smelt good. His scent was a heady mix of clean, just-stepped-from-the-shower freshness and musky, just-had-sex fuckability.

Christmas might be for family, but New Year is for friends. This year Sophie, Amelia and I spent the new year (or Silvester, in this part of the world) in Davos, Switzerland. Cold snow, hot chocolate and lots of flirting with hot ski instructors. The perfect start for what will be a perfect year.

Exercise More
A no-brainer. I'm not going to be a twenty something forever. And I really have no excuse since we have the treadmill and rowing machine taking up space.

Drink Less
Okay, maybe not going to happen. Not this year.

Australia!
I've never been and I really want to go.  I might even finally learn scuba diving. Definitely want to go snorkelling again.

Take this writing thing more seriously
This blog started it all, but now that I've tried writing stories of my own I really want to do more of it - and I want to treat it as more than the hobby it's been. Which means I need a bit of a subtle attitude adjustment. And to make more time for it.

Look into self-publishing
I've met some lovely authors who are doing very well through self-publishing. That seems like the path for me, so I need to learn more about it.

Phone Grandmaman at least once a week
Another no-brainer. I always have good intentions, but this year I'm not going to let a week go by without talking to her.

Someone to travel with
This follows on from 'Australia!' Much as I love my BFFs and much as I love the freedom of being single, I'd really like to find someone to travel with - a someone with strong biceps, broad shoulders and a six pack. Someone who can rub suncream on my back, hold my hand and share the adventure. Someone who'll stick around for more than just a quick trip Down Under.