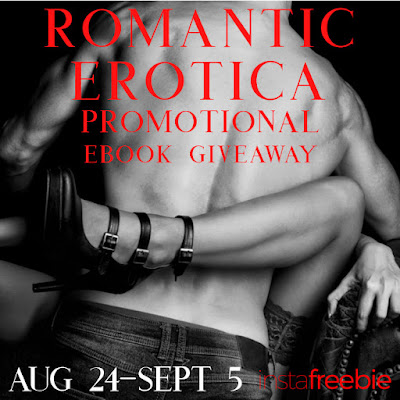 The promotion ends on 5th September, so check out the promo page now!

No matter what Gage said, there would be no coming back from this. This was her boss, dressed in nothing but a towel. And she’d just agreed to a no-strings fling with him. Maybe she was feverish. Maybe she was dreaming again.

She’d never done ‘no strings’ before. But her flatmate did it all the time, so how hard could it be?

“Stop thinking so much.” Gage’s voice was a growl against her cheek as he bent close. His body heat burned through the thin fabric of her camisole top.

Poppy breathed in deep and leaned back against the railing, her head thrown back, eyes closed. Gage’s hand slid behind her neck, into her hair, but still she didn’t open her eyes. Then his mouth was on hers, and oh God! He kissed even better than she’d imagined. All fire and promise. She opened her mouth to breathe him in, and his tongue slipped between her lips, playful and taunting. She sighed into his mouth, and gave herself over to his kiss, losing herself in it.

His other hand, still on her breast, squeezed and rubbed. Her own hands moved up, of their own volition, to explore his bare chest. The roughness of his hair, and the hard planes of muscle, scored against her palms. Then her fingers found his nipple, stroked, pinched, and Gage moaned into her mouth. He pressed his body against hers, and she could feel his desire throbbing between them.

When they came up for air, both breathing hard, Poppy was more than a little dazed. She protested when his hands left her body, but only for a moment. Effortlessly, he lifted her up onto the balcony railing, parting her legs and stepping between her thighs. She clung to his broad shoulders for support, but she’d never felt safer. He wouldn’t let her go.

His hand slid down over the curve of her stomach, brushed gently over her sleep shorts to settle at the apex of her legs. There it stayed, his palm pressing lightly against her soaking pussy. The weight and heat of his hand sent tremors through her as his mouth once again captured hers.

So lost was she in his kiss, in the taste and feel of him, she barely noticed when his fingers reached for the hem of her shorts, slid beneath the soft fabric. Then his hand traced the curve of her inner thigh, and she definitely noticed that. The rough warmth of his hand against the soft, sensitive skin sent a shaft of aching need deep down into her core.

Gage rubbed the heel of his palm across her pussy, feathering her inner lips with the tips of his fingers. She nipped his lip, playful, begging, and he slid one long, thick finger inside her. She moaned, deep in her throat, closed her eyes again, and let her body take over from her mind.

She was already so wet for him. His finger slid in and out, slow at first, setting a rhythm of slow, deep thrusts. She moved her hips, pushing into his touch, forcing him harder and deeper.

Her nipples chafed against the soft fabric of her camisole, so tight they were almost painful. As if sensing her need, his head dipped to her chest, his mouth clamped wet and hot over one straining nipple, sucking through the thin material. That touch was her undoing.

Her inner muscles contracted around the divine friction of his hand, the spasms rippling through her whole body until she was spent and limp. Her legs shook with the after effects of her orgasm.

The second orgasm he’d given her in less than twenty four hours.

This time he didn’t straighten her panties and walk away. This time he smoothed his hand over her still trembling clit, trailing his fingers up over her stomach, under her camisole top to circle her breast, while his other arm held her securely against him.

With his mouth still clamped on one nipple, still sucking her through her top, he cupped her other breast, gently kneading. He flicked his thumb over her taut nipple, and she bit down on her already tender lip.

It took every ounce of her willpower to push his hand away. Startled, his mouth left her breast, cold air rushing in where a moment ago her skin had burned.

“You don’t want this?” he asked, and she was touched that he was willing to step away, even though it had to be killing him.

She shook her head, had to clear her throat before she could speak again. “I want this. But this isn’t just about me. I want to do something for you too.”

He grinned, his eyes burning dark. “You will.” He bent his head closer, his tongue teasing along the sensitive skin just below her ear. His voice rumbled low against her ear. “The next time you come for me, I’ll be inside you.”


To read the full story so far, check out Poppy's Caribbean Adventure on Wattpad. And check back here next week for the next instalment...

It's been a roller coaster year so far!

Luca and I broke up at the end of last year - hardly surprising, since long distance relationships never work, do they? What was a little surprising is that we wouldn't have broken up with me if I hadn't found out he's started seeing someone else. Merry Christmas to me.
So I've been back in the full swing of singledom, dating, and partying it up!

I'd like to say I've been writing lots since the release of my Sinclair Brothers trilogy, but the truth is, I haven't. Earlier this year, I received a big fat promotion and have been given the responsibility of more clients of my own - and my own assistant - so work has taken precedence.

But I'm pleased to say that I'm getting back on track and have started work on the next trilogy. (Having the new assistant really helps!). I'm also going to start posting new installments of Poppy's Caribbean Adventure. Promise!

This weekend is my birthday weekend, and my gift to myself is to spend it writing. See you on the other side!

It's going to be a dark glasses kind of day. We got home sometime after 3am from Fright Night! at Opal Bar. After a few hours sleep I'm now on my way to the Eurostar to head home to the family for the week. Even Drew is flying in to spend La Toussaint with Grandmaman. More soon...

Olivia turns 30 tomorrow. Sophie and I have spent weeks (okay months) planning her party and it's going to be The Event of the Year. We've hired a glass party boat for a Thames Cruise, and a DJ to keep us rocking. There will be a set down dinner for 150 of our closest friends, and enough champagne to swim in.


(PS: I wouldn't mind if that fair-haired guy in the picture were thrown in as part of the package!)
Posted by Unknown at 21:22 No comments:

Aurelie turned up alive and well at her parents' house just outside Paris. She called me and we had a very long chat. She wants time to think about what she wants in her life.

Bastien is a mess. I went round to their apartment to check on him and we talked until late. I didn't know she was already pregnant when they married. How did I not know this? I think I've convinced him to go after her. I hope I did. I don't have time for the drama right now, as I'm arranging a fund-raising ball for one of our most demanding clients right now.

And I have books about to come out, and I owe you all an update on Poppy's Caribbean Adventure. (I could do with one of those myself about now!)

Aurelie walked out on Bastien yesterday. While he was out meeting a client, she packed her suitcases, took Daniel and left with nothing more than a note.

No, I'm not making this up.

He called me first, hoping she'd told me where she was going, but there was nothing I could tell him. I knew she was unhappy, but I really didn't see this coming.

She's my friend too, and I'm worried for her.

Email ThisBlogThis!Share to TwitterShare to FacebookShare to Pinterest
Labels: Aurelie, The One
Older Posts Home
Subscribe to: Posts (Atom)