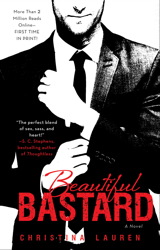 So I finally got around to reading Beautiful Bastard, the first in Christina Lauren's Beautiful series.

I think I avoided this for so long because I was sure it would be a disappointment. After all, how could it possibly match Beautiful Stranger? But it did. If anything, I even liked this book better.

The sex sizzles from page to page without ever getting boring, and the sparky dialogue between these two had me laughing out loud.

The magic in these books lies in that quirky mix of erotica and humour - it's so intense and so clever, and these ladies' writing leaves me in awe.

I'll leave you with this delicious quote from the book: 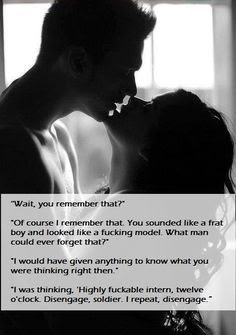 What does a girl do when her house mates are out on dates, and she's not interested in going out alone to score her own? She lies in bed with a bottle of Californian sparkling wine and her laptop, and starts to write a book.

So what do you think of my first attempt?

This was too good to be true. The doorman asleep downstairs, the usual security detail absent, and now the door to the penthouse stood wide open. She hadn’t expected to make it this far.
Lexy tapped tentatively on the door. “Mr Sinclair?”
A stifled moan answered her. Anger burned through her trepidation. Oh great, the legendary Lothario was no doubt at it again. At this hour of the morning!
A grunt.
She stepped across the threshold, shutting the door quietly behind her, and followed the sound. If he couldn’t be bothered to keep the door closed when he had company, then she wouldn’t be bothered to wait for an invitation.
Her heeled boots reverberated across the white marbled floor. The walls were white too, and the high ceiling. The only splash of colour in this vast entrance hall was the modernistic painting hanging on the far wall.
Jasper Sinclair’s art collection was almost as notorious as his love life. It was the art collection that had brought her here today. She couldn’t give a damn about his love life.
She’d come to retrieve what was hers, at any cost.
The door across the hall stood slightly ajar. She pushed it open. Another palatial room all in white, but this one she recognised. This was the living room where he’d been photographed for the article on his foundation’s charity fundraiser. The view beyond the windows was unmistakeable.
The armchair he’d posed in wasn’t in the same place, though. The photographer must have re-arranged the furniture. She frowned. The painting she’d spotted at the edge of the photograph wasn’t here either.
But at least two paintings were missing. Against the stark whiteness of the walls, the marks showing where they’d hung were unmistakeable.
Oh God, he couldn’t have moved them, could he? If he’d put that painting on display, or sold it to a gallery, she’d cut off his balls and feed them to him.
Another low moan. Closer this time. She didn’t care if she interrupted him in the middle of the throes of passion. He deserved it. And she wasn’t leaving without her painting.
She strode across the room, through double doors that stood wide into another living room, smaller, cosier but still that cold, impersonal white. Another painting had been removed in this room. She pushed open the door across the room, the final door, and froze.
Jasper Sinclair. Blindfolded and tied to a hard-backed, spindle-legged wooden chair that looked like it could be an antique, in the middle of a bedroom the size of her entire flat. The white sheets on the bed behind him lay rumpled as if he’d just got out of it.
His hair looked rumpled to, as if hands had run through it.
His head seemed heavy as he tried to lift it, as if he was just waking. Or coming around. He moaned again. It shouldn’t have sounded so sensual. It shouldn’t have sounded do arousing. But it did.
He was even better looking in person than on TV. He wore nothing but long black silk pyjama pants. His arms had been tied behind him, forcing his chest forward. And what a chest he had. Strong, tanned, almost hairless but for the dark arrow above his waistband.
As for those abs...her fingers itched to stroke across that smooth, solid flesh.
“Who’s there?” His voice rasped, dry and weak, and he licked his lips.
This wasn’t some kinky game she’d walked in on. She glanced up at the walls. Another painting gone.
He’d been robbed.
Fury bubbled up. He’d been robbed and her painting was gone. How could he keep such valuable works of art in an apartment with so little security? Did he value them so little?
“Who’s there?” he asked again, his voice stronger now. Almost cocky. Definitely more like the Jasper Sinclair she knew and loathed. “No one you need know,” Lexy answered.
He lifted his head, looking straight at her, and she was relieved the thieves had the forethought to blindfold him. She’d been afraid of what he might say, or do, if he recognised her. This way was so much better.
“What do you want?” He bit out. “I don’t keep cash in the apartment, and if you so much as touch one of my paintings, I’ll hunt you down and kill you.”
“I haven’t touched any of the paintings.” Yet. “How long have you been out?”
He licked his lips again, a movement that drew her gaze to them. She didn’t normally notice lips on a man, but God, he had a beautiful mouth, full and sensual. She licked her own lips.
“You’re not one of them?” he asked. “What time is it?”
“A little after seven.”
Jasper shook his head, as if trying to clear it. “It was still dark when I woke. Someone was in the room. I think he must have knocked me out.” He looked straight at her again. “Untie me.”
Not if her life depended on it.

And now we're getting to the really interesting stuff... what would you do with a gorgeous, naked, blind-folded man who's tied to a chair?

PS: You can also come find me on Wednesday at the Giovanni Battista Moroni exhibit at Burlington House. I'll be the one with a drink in my hand.

Nothing much happening this weekend. With the sun actually peeking through the clouds, it's really pleasant just to sit in the garden for a change and drink tea and read a good book. Also fitting to enjoy the stillness and take a moment to enjoy being alive, since it's Remembrance Day today.


100 Years since the start of the first world war. Check out Alan Ranger's poppy field pictures.
Posted by Unknown at 14:43 No comments:


Awesome! I joined my little brother Drew in Manhattan for a weekend, so I packed my Halloween costume and headed to NYC. God, I love my little brother! He's the only one in my family who knows how to party.

He also surprised me by being really organised. On Friday night, we joined a group of his friends for champagne on the rooftop of a swanky hotel (see, I'm picking up the local lingo!) before we headed to the Sinners & Saints gala at Guastavino's where Drew had organised us all VIP access and bottle service.

Naturally we slept in really late on Saturday, then that night we headed to Bleecker Street for pizza and clubbing, ending up at the Bowery Ballroom. I managed to get in a little shopping at Bergdorf's on Sunday morning before catching a flight home, and I'll admit I slept pretty much the entire flight.